“I know that you can do the impossible” 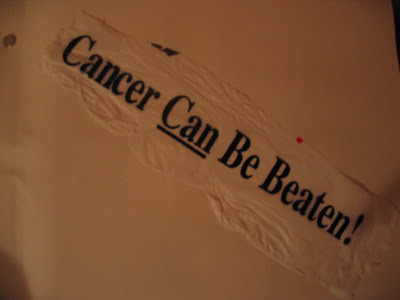 I got approved for life insurance this week!

And April was cancer month. Or so said the National Cancer Society.

What do these two random items have in common? My thyroid. Because it was eleven years ago this week that I had the first of two surgeries for thyroid cancer. And while that's something to celebrate, it's also been eleven years since anyone has agreed to insure me. Every time I've tried for insurance, someone reads my health history form, sees the "cancer" box checked off, and rejects me. I've been told that I can't even donate blood. But this time was different. This time, I got a second letter, with a more detailed questionnaire, wanting to know about the type of cancer I'd had (Thyroid, papillary), size of tumor (2+ cm), stage (II), and treatment (surgery x2 plus radioactive iodine). And then finally after all these years, someone somewhere deemed me insurable. They believed in me.

I wish I could say that I'd always believed in myself, but there aren't a lot of cancer success stories out there. Or, at least, there haven't been in my own experience.

My father died of cancer in his early forties, as did his mother, so yes, I suspected that I'd need to be watchful when I got to that age. What I didn't know was that it would hit me so much earlier - at 28. The writer in me likens it to the final fairy in Sleeping Beauty. You know, the one who says she can't remove the curse of the evil fairy, but she can soften it a bit, by making it 100 years of slumber instead of instant death? I see my cancer kind of like that - as if it was, genetically, perhaps inevitable. But also as if someone (okay - my dad) was watching out for me, and trying to soften it a bit, by making it happen while I was young and otherwise healthy, and by making it one of the least deadly cancers.

My doctors all called it a "good" cancer, because of its excellent long term survival/cure rates when caught early, but I refuse to to describe any cancer as "good". Young or not, treatable or not, cancer is terrifying. And I didn't know, for a long time, whether I had the physical and emotional strength to get through it. But because I had my surgery in late April, and the final pathology report (aka official cancer diagnosis) in early May, the plastic grocery bags they were giving out that year right after I got the news were still left over from "cancer month", and they all said "Cancer Can be Beaten". Up until that time, I hadn't actually known many people who'd proven that. And honestly, today, I still don't. But I tore a bag open, stuck it on my fridge, and I left it there for months, through another surgery, through radioactive iodine treatment, and through the time I just felt awful because I'd lost the gland that controls everything in body, and the replacement hormones just didn't seem to be helping. And every time I looked at that bag, I felt a little bit of hope.

Today that bag is in the front of a scrap book I made during that awful period, along with pictures of all of the flower arrangements that I received, and every single "Get Well" card. Individually, they were all powerful. But together, they were tangible proof that other people believed in me when I couldn't do it myself.

Now that I've been approved for life insurance, I have proof that finally, eleven years later, the statistics believe in me, too.

Terry Fox said "I know that you can do the impossible". Breaking the family curse once felt impossible. But maybe I just did it.
Posted by Kimberly Joy Peters at 7:48 PM No comments:

The times they are a changin'

Summer, 1983: Madonna bursts onto the music scene. I am just about to turn fourteen. Video is a brand new medium, and she uses it to her advantage, wearing edgy clothes that appeal to teen girls who want to be like her, and teen boys who want to date her. Parents, spurred on by the media, start freaking out. Then comes the "Like a Virgin" album.

It was LIKE a virgin, people. It wasn't a song about losing your virginity - it was a song about feeling as if everything is new.

Like a virgin was a SIMILE, but most people didn't listen carefully enough to get that. I got it. I saw her as someone who was courageous, and went for what she wanted. And I've still got my "Virgin Tour 2005" T-shirt to prove it.

April 2010: Glee runs an "all Madonna" episode, using music from each decade of her career. They call her "empowered" and "empowering". They said she was a strong female role model.

So, what happened? Did she prove herself over the years through her staying power and constant reinvention? Did people start listening more carefully? Did anything really change? Does she just look tame now in comparison to today's video stars? Or are the "they" who are declaring her a role model just middle aged people like me who grew up with her?
Posted by Kimberly Joy Peters at 6:32 PM No comments: 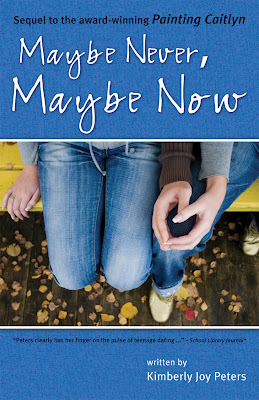 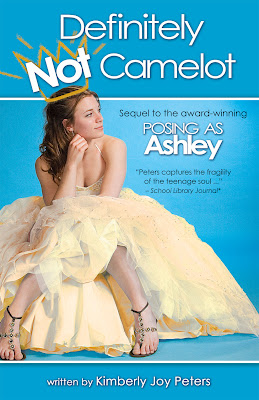 I am delighted to share with you the covers for my forthcoming (and hopefully long awaited?) books, Definitely Not Camelot (sequel to Posing as Ashley), and Maybe Never, Maybe Now (sequel to Painting Caitlyn). Huge thanks to the goddess Tammy Desnoyers at Lobster Press for these gorgeous covers!
Posted by Kimberly Joy Peters at 7:34 PM No comments:

We had an author at school the other day. He arrived during what is normally the grade 4/5 French period, so I had to take the students down to the gymnasium, and as we were about to line up, they all started grabbing pieces of paper out of the scrap bin. "Why are you bringing paper to the gym?" I asked. "We want his autograph," they told me. "Because he's an author." I had to laugh, because to them, I'm their French teacher, which makes me so not autograph worthy...and yet, the very next day, I was off to Maxwell Heights Secondary School in Oshawa to be (tah dah!) their guest author.

It was a great audience, including members of their "Girl's Group" and "Creativity Club". They asked good questions about writing and inspiration. And many of them hung around after for autographed bookmarks. (No scrap paper for my fans!) As always, I was touched and humbled to hear from so many readers who said that weren't in the habit of picking up novels, but who, after picking up Painting Caitlyn, said they couldn't put it down until they'd finished. But the story that touched me the most was this: one girl said she'd loved the book, and taken it home to her mother, who was now reading with her. After the students had left, her teacher told me that this is a girl who has rarely had any sustained interactions with her mother - let alone positive ones. But they have connected through this story. That's the transformative power of books. The autographed bookmark might not last - but I hope she has the good memories of this time with her mother forever.
Posted by Kimberly Joy Peters at 2:17 PM No comments:

Ever since my last post, about the sudden, premature death of my friend James Effer, I've been trying to figure out how to keep blogging. What can I write now that won't seem trivial? Self-involved? Pointless? Maybe nothing. But even though it feels - when something like this happens - as though everything should stop, it doesn't.

As a staff, we all went to school the day after we'd heard the news, and cried together in the staff room. Then the bell rang, and we had to tell the students. From then on, the rest of the week felt very unreal, and dream-like.

I spent two nights going through eight years of archived school photos, looking for pictures of Jim. It wasn't easy - because usually, he was our photographer. But I enjoyed the pictures, and felt a small burst of satisfaction every time I found one where we'd caught him for a change. It made me feel useful during a time when it feels like there is so little one can do. Then, on Wednesday night, I pulled an "all-nighter" getting a memorial slideshow ready for our students. At ten o'clock, I had the basics together, and probably could have burned it to DVD. But the music didn't line up the way I wanted, and I was hoping to add a few more photos. So I kept working. At midnight, I discovered a problem with my Windows Media Player, which I needed to convert some music for the show...I spent a long time mucking around with it, and then finally turned everything off, re-booted, and all was well. By 3 a.m. I'd hit that point where the adrenaline kicks in, and I couldn't have slept if I'd wanted to. I was creating something. I wanted it to be perfect. I wished I'd had more time to record voiceovers with the students who worked with Jim, but I reminded myself that what I had (no rehearsal, one take!) was authentic, and that counts for something, too. At 5:30 a.m. I put a disc into the computer and prayed that all would burn properly. At 5:45 I went to bed, and at 7:00a.m. I got up again.

The DVD burned properly, and I set up the data projector at school just the way Jim showed me. But I wanted a cable to connect the sound through the gym speakers, and nobody, at first, knew where the cable was, or how it worked. Made us miss Jim a little bit more, and wonder what other "soft knowledge" we'd be looking for without him.

I have never seen our students so solemn and respectful as they were that day. A teacher who told me she never cries - not even for her own father's funeral - said the tribute I'd made brought her to tears. My principal took my hand and said it had been perfect.

I will make copies for Jim's family. But I haven't done so yet.

We had a funeral to attend that afternoon. Then, because nobody felt quite ready to go home yet, we went out together as a staff. I needed a break from the sadness, and I couldn't do the DVDs that night anyway, as I had prepare for a conference the next day...

Life goes on. Forever altered, but still - thankfully - it goes on.

Our school pictures will be missing something now. So will our staff.
Posted by Kimberly Joy Peters at 6:11 PM No comments: