Summer's over and I've got Poison Ivy again.
Posted by Kimberly Joy Peters at 12:58 PM No comments:

There is a message on my answering machine from an internationally recognized radio and television personality. I won't say who, because I'd like to protect their privacy, but I will acknowledge that this person cottages just across the street from me, and that 9 out of 10 of my friends would immediately recognize the voice if I replayed the message for them.

I am not a celebrity. Certainly, not like my neighbour. But the gallery is nearby and a few years ago when they were initiating the idea, and my first book had just been published, a friend nominated me as a bit of a local celebrity. They were desperate, I got in.

Anyway, this year I asked my oh-so-much-more-famous neighbour to participate. And the response on my answering machine is "thank you, but no - I haven't got an artistic bone in my body and it would just cause me too much angst."

Angst? Angst??? How could this simple thing cause angst? I wondered. All you have to do is paint a picture...

(This is my 2010 submission. It's called "Contemplation," and you can buy it at the auction this Saturday night, August 21st, at the auction described above.) 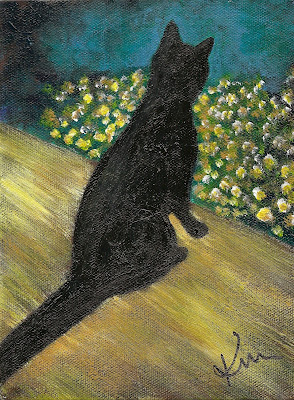 All you have to do is paint a picture.


And yet. And yet if it was a celebrity softball tournament, I wouldn't consider it for a second. I can't catch flying objects, and I barely run fast enough to catch a cold! I don't do sports. My neighbour doesn't do art.


All of which got me thinking about a conversation I had with my aunt a few weeks ago. I was telling her about a friend of mine who, back in high school, had marks that averaged in the 90's, held a part time job, and still always made time for other people. (Later, she skipped her master's degree and went straight into a doctoral program, giving birth to her first child while preparing her doctoral thesis because - what the heck - she was off anyway!) "I think that's one of the things I really liked best about her," I explained. "She just does all these great things and makes it look easy, but I never have the sense that she's bragging or putting anyone else down," I said to my aunt.


"Although," I admitted, "sometimes I feel really pathetic in comparison. Like when I called to tell her I'd been accepted into teacher's college, and found out that she had just accepted a job as a univerity professor. I just don't personally feel that I can ever measure up to her."


"You know," my aunt said gently, "there are probably people who look at you, and the fact that you work full time and teach other teachers for the school board and write books, and think you're pretty accomplished, too."


She may be right, but I hadn't thought about it that way, because I -- like many people -- tend to compare myself to others who seem more accomplished, and focus on what I haven't yet achieved. It's probably okay to think that way if it keeps me humble or drives me try new things, but maybe we all need to believe in ourselves, and our abilities, a little more often.

When is a book no longer yours?

I did an author appearance last week at a summer school class (hi girls!) and one of the questions that came up - as it often does - was "how do you pick the titles for your books?" In explaining that I have (thus far) been extremely lucky, and had the full support of my editor on all of my titles, we then got into a discussion about the editorial process, and the types of changes that happen throughout. My experiences with editing have ranged from the painless (Can we change "my parents will kill me" to "I'll be grounded for life"?) to gut-wrenching (No. Because of x, y and z, you absolutely can not include that plot element)...and, I suspect from reading other author's blogs that my experiences are not unique. And yet, the girls at summer school were - as most people outside of the publishing industry tend to be - absolutely SHOCKED that ANYONE besides an author should get any say in what gets written. Even when I got my first contract, I didn't yet understand that like a close friend who will be totally honest when you shop for bathing suits, a brilliant editor (and I have had them) will point out all of the opportunities for improvement, as well as the things that are already strong. Authors tend to get the credit for successful books, but good editors go a long way towards getting them there.

And then, there are ghost writers. The other night I was in a large chain bookstore in downtown Toronto, and found myself beside a huge line-up of book buyers all waiting for the "author" to sign their purchases. I put "author" in quotes because the person whose name appeared on the book - the person who was doing the autographs -- is actually the former drummer of a very popular 80's rock band. (Yes, I have their greatest hits, no, I'm not naming names). And maybe he did write his own memoirs - Jimmy Buffet has actually carved out quite a nice little fiction empire for himself - but I'll be honest: I wondered. Did this guy actually sit down at a keyboard and TYPE? Or did he do some interviews, and just approve the copy that came back to him? Is he still the author, if it's his life story but he didn't write a word? And more importantly, if it's a compelling story, does anybody actually care? Last January, The New York Times published this fascinating piece about author James Patterson's stable of ghost writers. And I've been thinking about it ever since. Then, today, I read this little blurb about creativity, which suggests, of all things, that group brainstorming DOES NOT WORK, and the theory that it does was actually disproved in 1958!!! So take that, army of ghost writers - James Patterson might be richer, but I can be more creative without you!
Posted by Kimberly Joy Peters at 1:42 PM No comments:

Me, a pool noodle, a warm night, and the sun setting over the lake.

Summer really doesn't get any better than this. 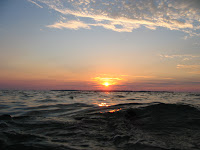 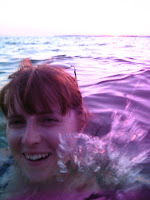 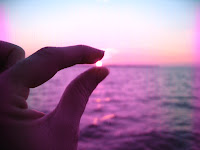 Look! I caught a sunset!
Posted by Kimberly Joy Peters at 6:54 PM No comments:

Watch this space for a contest related to this trailer!

http://www.youtube.com/watch?v=hEYoVpmH5p4
Posted by Kimberly Joy Peters at 9:38 AM No comments:

...or, at least, I did in my earler blog post "Me, the Cat Lady", which was the sample text I inserted HERE, on the "I Write Like..." text analyzer.

But when I insert the edited opening paragraphs of my new novel, Maybe Never, Maybe Now I write like J. K. Rowling.

The opening paragraphs of Definitely Not Camelot link me to Vladimir Nabokov (whom I only know of through the old Police song, "Don't Stand so Close to Me" in which Sting sings: "It's no use/he sees her/he starts to shake and cough/just like the/old man in/that book by Nabokov."

And a paragraph I wrote for the first draft Definitely Not Camelot - a paragraph my editor cut - apparently resembles the style of Stephen King.

Huh.
Posted by Kimberly Joy Peters at 8:00 PM No comments: