Back to the Future!

Okay - so as promised, more info on the high school/university visits the other day!

On Friday, I went back to Cameron Heights Collegiate Institute. It's the high school I attended, and I haven't been back since I graduated in 1988. I went to play "alumni author", read to the group of girls who gave up their lunch hour to come meet me, and then chatted up the Writer's Craft class in the exact classroom that was my first homeroom. SO FUN! Back when I was taking Writer's Craft, we were promised an extra 3% on our grades if we could get published - in any form - during the year. I wrote a letter to the editor of the local paper complaining about some really rude, denigrating jokes about women and was THRILLED when I got my name in print. Not, as it turned out, because of the 3%, which didn't really excite me all that much, but because someone thought something I'd written was worth putting in print. (You have to bear with me and understand that this was WAAAY before the internet, blogging opportunities, etc. People had to actually pick up pens to write things, and you were really "high-tech" if you had an electric typewriter).
Anyway, it seems that not a lot has changed, physically, in that building. Some pics:

A mural that was painted (not by me) during my time there, and remains today: 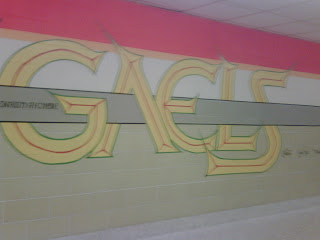 One of these lockers is the last one I ever had. Still know what the combination was, and remember clearly that Mike Raletic's locker was on my right, and Christa Ptatschek's locker was on my left, but couldn't pick the actual locker out of the line-up (sniff!): 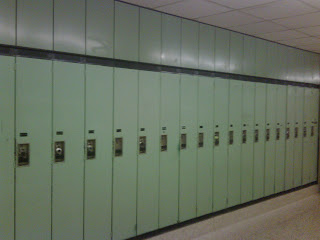 A locker decorated for someone's birthday, just as we used to do, and described in my book Painting Caitlyn: 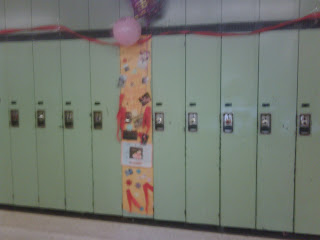 After the high school visit, I headed over to the University of Waterloo for the 50th anniversary of it's Faculty of Arts, where I sat with some of the smartest women I know. My friend Wendi, Executive Director of the Foodbank of Waterloo Region. Theresa (my first roomate!) works for Kraft Foods, and is partially responsible for hilarity like this bit on chocolate. And the ever effervescent Sandy is now perfectly positioned as a Twitter goddess (@sassygirlcanada) and communications expert for Research In Motion (yes, the Blackberry people). I don't see them often. But when I do, it's super fun. And since this was an alumni event, we were younger than almost everyone else, easily making us still the hottest girls in the place! (will post pics of us when I get copies of the ones the photographer took).

Finally, here's what the high school and the university had in common:

THEY BOTH GAVE ME FANCY CHOCOLATE!!! 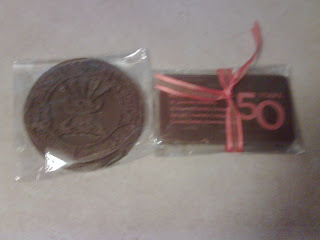 Posted by Kimberly Joy Peters at 6:48 PM No comments: