Hey guys - switch over to http://www.moonlightlacemayhem.blogspot.com/ where I am the guest author blogger today!
Posted by Kimberly Joy Peters at 11:16 AM No comments:

The Hunt for Oliver Henry 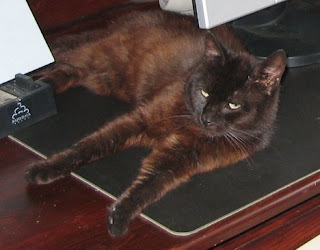 Hi All - I got off track on my book deadline (yikes!) last week because I have been DESPERATELY searching for Oliver-Henry, my new little kitty friend who snuck out on my mom while she was kitty-sitting. He is deaf, and my mom lives two hours away, both of which make finding him quite a bit trickier, but I have taken (I think) some very creative steps towards "getting the word out", and I remain hopeful that he WILL return. He is quite a special little guy: started life as a barn cat, got stepped on by a cow (major injuries, no veterinary care, but he pulled through), started sneaking into the farmhouse because hey, it's safer in there! Started getting tossed out of the farmhouse - by the tail - into the pine tree. Continued sneaking in, continued getting tossed. Was "saved" by the farmer's daughter-in-law (my friend Colleen!) and delivered to me in May.Here's the thing: my husband has never really bonded with any of our cats. He tried with Sacha, but she'd decided years before I met him that she really didn't like anyone except me. He sort of tried with Sam, but Sam was already 16 when he moved in, and he woke us up A LOT at night, which made it kind of hard for them to get along. But Oliver-Henry (O'Henry) played it differently, and climbed right up onto my husband's lap every chance he got. He also quickly learned to hang around on my desk while I write. Unfortunately, as a former barn cat, he needed neutering, and I was advised to wait until six weeks after he'd had his final set of vaccinations...so now he's at large in Kitchener-Waterloo with testicles, and that may mean that he's a long, long way from where he started out. It also means that in a few weeks time, there may be many more chocolate brown/black kitties in Kitchener-Waterloo looking for homes. And that sucks. Because I have been brutally reminded this past few wees that animal shelters and rescue groups are full, full, full. In KW, they stay at the Humane Society for only 72 hours before going out for adoption. I walked through one day (but mostly my mom's been doing it for me) and there were so, so many cats who were in the middle of that 72 hour period - all lovely, all needing their people to come and get them out. But their people weren't there, and if my heart hadn't already been broken and heavy from the loss of O'Henry, it would have broken there. So even though I know I said it already in Posing as Ashley, please hear me out again, and get your pets spayed or neutered (I really was going to - really - he had an appointment booked). Even if you happen to find homes for all the kittens, that's a bunch of homes that are no longer available to the thousands of adult cats who already need homes. And just in case you're thinking kittens are more fun, here's Ten Reasons to Adopt an Older Cat.And if you happen to be in the Kitchener/Waterloo/Cambridge area, keep an eye out for O'Henry.Meanwhile, as I said, I am behind on my deadlines, and feeling unprofessional about it. But sometimes it's more important to be unprofessional than uncaring.
Posted by Kimberly Joy Peters at 8:10 PM No comments: