On Thursday, I attended my second Movies, Martinis and Manicures event at The Roxy theatre in Uxbridge, Ontario.
It's a fundraiser which they theme around a chick flick. This year's movie was the 1997 flick My Best Friend's Wedding. We received mini veils with our tickets, and garters upon arrival. Guests were encouraged to send in their actual wedding photos in advance for inclusion in a slideshow on the big screen before the event, as well as to dress up in wedding attire.
I did send this wedding pic (circa 1994 - the glasses betray the date, but I think my dress and hair still have a classic feel). It's one of my faves, because a) it's casual and b) my eyes are actually open. 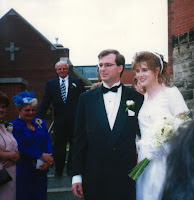 But I have to admit that I caved on the costume factor, for a number of reasons: I didn't want to wreck any of my good dresses, some of them don't fit right now, and I just really, really, really hate being cold. This is not me acting like an old lady. This is me being honest about who I am, and always have been. Even in high school, when everyone else was wearing running shoes through th snow and pulling their hands inside their sleeves and their shoulders up to their ears thinking that looked "cooler" than dressing properly for winter weather, I was the exception in boots, mittens, and hats or earmuffs. So let's just say that the other night I wore "Vegas wedding" attire: 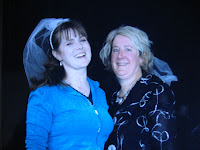 (that's my friend Mary beside me).
So, pre-show, we ate wedding themed hors d'oeuvres, bit on silent auction items, had our pictures taken, and got our nails done by a number of local manicurists who donated their own time. Then they set us up with popcorn, a dessert table, and a "candy buffet". The candy buffet got me to thinking about the differences between children and adults. When you are a kid, it sounds like a dream to have enough money and independence to go to the candy store whenever you want and buy as much as you want. When you are an adult, you can. But most of us don't. And then when you find yourself at a fundraiser filling small paper bags with Glossettes, licorice, gummi bears, etc., you get crazy excited! At least, the women I saw did.
Anyway, the biggest gasp of the night came during the opening scene of the movie, when Julia Roberts' character reached into her handbag and pulled out a GIANT cell phone which she not only had to flip open, but also raise the antenna on. Crazy!
Posted by Kimberly Joy Peters at 11:15 AM No comments: