I dreamt about goldfish last night. Not just any goldfish - a whole bunch of them, in a great big tank that was maybe 10 feet by 10 feet.

This is NOT a result of the huge tanks I saw in the casinos in Vegas. This is because I am stressed.

Goldfish are a recurring theme in my dreams, and it took me years to make the connection, but they always show up when I am under pressure. I'm not a psychologist, but I think the reason is pretty obvious: in university, I made the decision to euthanize a fish I'd had for over 8 years. He'd outgrown his tank, and outlived his peers, and no matter what I did, I couldn't get his water to stay clean and chemically balanced, which was making him sick. I felt terrible about it, but he (she?) was miserable. In those days, we didn't have the internet, so although I researched the best I could, I just couldn't find any solutions. And I didn't want him to continue to suffer with fin rot and ammonia burns. So on the advice of a pet store clerk, I put him in a bucket, and slowly let him freeze to death. (Not as cruel as it may at first sound, since fish are cold-blooded and don't, apparently, feel it). Still. I feel like a quitter when I recall the incident. And I feel like a failure.

So now, whenever I am facing a challenge, I dream about goldfish in distress. Goldfish that have leapt out of their tanks, and need to get back into the water. Goldfish that live in my basement, but whom I have forgotten about and carelessly neglected. Goldfish who have multiplied beyond reason, and now need to be re-homed.

Don't get me wrong - I LOVE goldfish. And, as I said above, that particular fish was with me from eighth grade, all the way through high school and into university. He lived (I hope) a pretty good life, as feeder fish go.

I also had these two lovelies -- Dasher and Blitzen -- with me for over five years, moving from pond to classroom with the seasons, until one day they just mysteriously vanished, without a trace. (A raccoon? A Great Blue Heron? Alien invaders?) The cat they're "talking" to is Sacha, my first "chat noir" and baby girl. 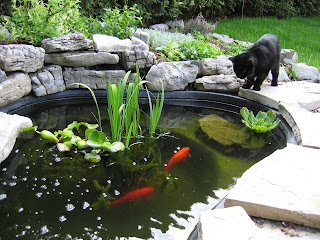 But regardless of my affection for goldfish, and my continued efforts to give them the best possible care, they haunt my dreams.

Often, I won't even consciously know that I'm feeling pressured until I have a goldfish dream, but it's obvious that my subconscious won't let me forget my guiltiest failure (I must have been able to do SOMETHING differently!) and trots it out again for me every time I'm potentially facing another.

The stressor today? A combination of things, probably. A presentation I'm scheduled to give to other teachers in mid-February. Some stuff I need to do for school. And, most likely, the revisions I got from my editor last night. I thought we were done. I was basking in the freedom of NOT having two jobs, not working late into the night, not having to negotiate for what I want to say.

But now, I'm back to stalling/blogging. It probably won't make the fish go away, but at least it gives the cat a chance to come and purr on my lap. And that is one of the greatest de-stressors I know.

P.S. As always, photo courtesy me, all rights reserved.
Posted by Kimberly Joy Peters at 11:33 AM 2 comments: