New Year's in Vegas, New Cat in the House 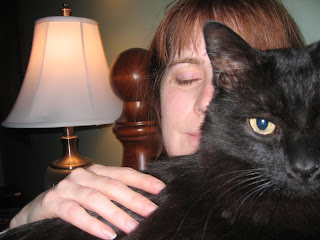 Happy New Year! (I know, I'm a week late already, but at least I'm saying it.) Yes, there is a new cat in my house. His name is Majik. He is not a replacement cat - he is an extra cat. Here's what happened: I saw his picture at www.torontocatrescue.ca while searching for Oliver-Henry. The picture and description (friendly, small, etc.) looked very similar, and I was hoping it was him. I emailed. It wasn't. But Kathleen, the "foster mother" likes to place homeless cats, and suggested I might take Majik and give him a home. I said I wasn't ready. But I kept thinking about him. And then, it occurred to me that although my husband would never willingly agree to two cats, he also wouldn't be so cruel as to make me give one back when Oliver-Henry comes home. So I decided to sneak an extra one in NOW, while I'm sad, and need cheering up. Bonus: black cats used to be considered good luck, and Julius Ceasar kept one for that reason. And if you read Posing as Ashley, you already know that. So now, with a little Majik in the house, Murphy's Law says Oliver-Henry's return is imminent.

As promised, this little guy is lovely. He is cuddled into my neck as I type. He squeaks softly more than mews. He is great with Spencer. And he has a fluffy tail, which is kind of fun, and nice, since the last two black cats did not, nor does Mr. M.I.A. He is believed to be about three years old, and has already had that all-important operation that will keep him home. All I know is that he was unclaimed and on death-row in a high-kill shelter in Hamilton before Toronto Cat Rescue sprung him to the foster home (she has since been able to save another, because I freed up a space in her home when I took Majik). So yes, I Googled "lost black cat Hamilton", still hoping to reunite him with whoever lost him. Sadly for them, and luckily for me, nothing came up. And that does make me a bit angry, because although I understand that not everyone will spend six months or longer searching all the shelters and rescue organizations, I would think most people could manage an internet classified. I feel badly for him that his first family isn't looking for him (or at least that I can't find them for him). On the other hand, it has been really healing for me to see how easily he's fit in here, and how quickly I fell in love again - it reminds me that even though I want Oliver-Henry back desperately, it is possible that he could be happy somewhere else, and someone else could love him lots. And that's comforting.

In other news, I was on the 401, on my way to pick Majik up, when my husband got a weekend flight to Vegas for New Year's Eve (he's a corporate pilot). I had to make a split second decision about whether or not to go, but when my mom agreed to some and critter-sit, I booked a flight to meet him down there. (Sidenote: on the way down, I had my first ever "pat-down", courtesy of airport security...) This is a picture in front of the MGM 29 seconds before midnight. 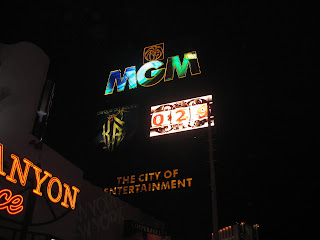 And this is me, out on the Vegas Strip right after midnight. 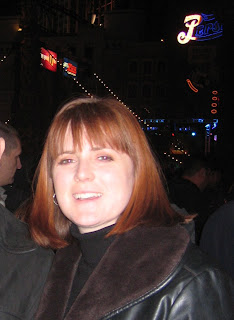 Hooray!
Posted by Kimberly Joy Peters at 2:49 PM No comments: