Highs and Lows of School Trips

A picture from the trip: 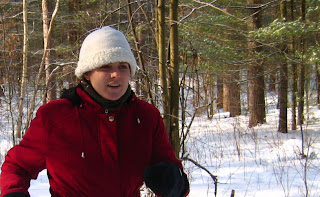 ...and a story to explain last week's comment about adult geeks vs. child geeks on school trips.

My first school trip was in January the year I was in grade 8. I went to a big school, with several grade 8 classes, so there was no way that the whole school could travel at the same time. Unfortunately, my best friends were not in my class, and their trip was scheduled for the beginning of the week, while mine was at the end. Consequently, I ended up rooming with another girl in my class who was immature in a "I'm thirteen but I still like playing Barbies with my ten year old brother" kind of way. Now, lest that sound judgmental, let me explain about my own situation. I was tall and awkward. I was the smart kid. I was not terribly interested in guys, or fashion, or wearing make-up. Maybe you could say that I was immature, too.

So we arrive at the outdoor education centre and discover that there are not enough rooms on the girls floor, and too many on the boys. Guess which girls got put downstairs? Yup. The ones the teachers trusted. I get that. I got it even then. No way would I have put the flirty impulsive ones down there. But still. It felt humiliating -- not as if the teachers were saying "we trust you" -- as if they were saying "you're not desirable to the guys". Ouch.

Predictably, the flirty impulsive girls tried to use me and my roomate, inventing lame excuses to "visit" our room.

I got through it. And you know what? By the time I got chosen as one of six students from our school to go on a Quebec trip five months later, one of the two boys who'd been selected – realizing that I didn't know the other three girls who were going -- said "Don't worry, Kim - you can hang out with me and Mike." I did hang out with Duncan and Mike. But I also got to know Cindy, Wendy and Andrea, (who you read about earlier in A Tale of Two Islands).

So why do I always remember the perceived humiliation of the winter trip, and not the triumph of Quebec?

Maybe because new research shows that

"Your brain preferentially scans for, registers, stores, recalls, and reacts to unpleasant experiences; it's like Velcro for negative experiences and Teflon for positive ones. Consequently, even when positive experiences outnumber negative ones, the pile of negative...memories naturally grows faster."

Too bad. Because my students spent way more time on the ropes challenges, the hiking, the campfire, and the games than calling each other "flat", but no matter how much fun everything else was, the name calling is probably what two of them will remember most.
Posted by Kimberly Joy Peters at 10:46 AM No comments: