It's August. And I haven't posted a single thing in over two months.

Ahh...vacation!
Several recent summers have been consumed by writing deadlines, and last year I was preparing for the launch of two books.
And because I still have a "day job" (which I love), June was crazy-busy.
So although at first, I was feeling guilty and slacker-ish for not posting here, I eventually decided to make it a conscious blogging break (which, of course, immediately meant I discovered all sorts of amazing blog-worthy material).
I had a full - but relaxing - July. It all started with a wedding, where the power went out! The bride was the daughter of my very good friend, Laura, who was my roomate in Quebec during the summer of 1988.
Shortly thereafter, I headed out to Winnipeg to visit relatives. It had been a long time since I went on the kind of vacation where I was just the guest, with no real touring or sightseeing or anything to do, and it was fabulous. Even more fabulous was the chance to reconnect with my cousins and their children.
I came home to a cottage full of longtime friends and their families - all together, we were six adults, four kids, three dogs, some delicious food and a lot of laughs.
Then, I spent a hot, hot week at home in Ontario during the heat wave, swimming in the lake almost every day (sometimes alone, often with my friend Joanne), entertaining my mother and my honorary "aunt" Mary, and going to an outdoor theatre in record breaking temperatures.
Right about then, my friend and colleague Colleen called me from Nova Scotia, to invite me out to visit her at her summer place in Guysborough. I don't usually lean towards spontaneity, but I'm trying to, more and more. So I cashed in some Aeroplan points for a flight to Halifax, and surfed the internet for a decent rental car rate: FYI, Alamo was about 1/3 the price of all of the other major rental places, including unlimited mileage! "Veronica" (my GPS) got me out of parking garage, and pointed me East as the radio played - I kid you not - "Born to Be Wild". (It turns out that it's tough to actually be wild at 41 and 44, with a six-year-old in the cottage, but we did manage to talk our way out of ticket one night...). I spent the final afternoon kicking around Halifax Harbour where I bought the beautful Sea Glass Hunters Handbook, 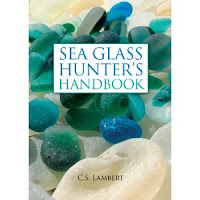 featuring a photo of a pink heart-shaped piece of seaglass much like the one I have, and featured in the trailer for Maybe Never, Maybe Now! My flight was scheduled to leave Halifax at 10:50 p.m., and at 11, they announced that due to a mechanical issue, it was cancelled! Most people on the flight were, understandably, frustrated and upset, but I was in the fortunate position of not really having to be anywhere else right away, so with a little help from someone I love, I managed to secure a reservation in one of the only area hotels that still had a vacancy. The shuttle arrived within fifteen minutes, and I spent a lovely night in a beautiful hotel room before finally flying back to Toronto the next day, just before noon.
I had a day or two to do my laundry and remind my pets that I do actually live here, before packing up the boat and heading out for the long weekend with another large group of friends.
In and amongst the craziness that was my month, I have read some wonderful books (which I will share with you, here), and begun to write anew (mostly in my head, but that's where all of my ideas root before I transplant them to keyboard). Reading back through the highlights of July, I notice the common threads of family and friends, many of whom I have not seen in previous summers as I shut myself in to write. My books are all about relationships - how lucky I am to be celebrating my own.

I look forward to renewing my blogging relationships, as well!
Posted by Kimberly Joy Peters at 8:40 PM No comments: