A Tale of Two Islands

You wouldn't know it to look in the archives, but I actually blog every day. In my mind. In fact, I'm almost always "blogging" as I'm walking the dog, or trying to get to sleep - but clearly, if I don't actually get the ideas out of my head (brilliant or dull as they might be) and post them here, they don't really count.

Sometimes, I need time to think and arrange before I type (my first book, Painting Caitlyn, actually rolled around inside my head for YEARS before I finally started pulling it together as text), but usually, it's just distraction and procrastination that keep me from doing it. And so, an entry about the distractions that occurred between August and October.

1. Obviously, Oliver Henry
I am still looking for my cat (see preceeding post). All of the free surfing time I can find goes to perusing Craig's List, Kijiji, and random Google searches for "Found Cats" in Kitchener, Ontario.


(Drumroll, please) Book three, Definitely Not Camelot is finished. It even has a cover, but I'm not sure whether or not I'm allowed to share that yet, so we'll save it for a future post. Book four, Maybe Never, Maybe Now is "in process" (ie. I'm stalling on it right now by catching up on blogging!!!) and will be finished very, very soon.


Okay - so enough of the numbered lists of excuses. Here's the coolest thing that's happened lately: I turned FORTY!!! Woo hoo! Now, I know it's unusual to cheer about turning forty, because it makes me sound really, really, old. I do. And I worry - just a tiny bit - that the number itself could be a "turn-off" to my YA audience. But here's the thing: my maternal grandmother died from cancer at 45. She had just one biological child (my dad), and he died from cancer at 46. I am his only biological child, and I've already had cancer (thyroid, when I was 28 - yet another subject for another day). I could worry about what genetic horrors may be lying in wait for me over the next few years, but instead, I'm celebrating that I've made it this far. And that the journey, for the most part, has been positive. In the middle of August, I invited several friends to join me for a weekend at my cottage on Thorah Island, in celebration of "The Twenty-Fourth Anniversary of Our Sixteenth Birthdays", but before arriving, I asked each of them to email me with one thing they know now (in their forties) that they wish they'd known then (in their teens). Some of them have been my friends since high school. One was my first roomate in university. And one of them is now a co-worker. Here is some of our collective wisdom:

This is a picture I took just before we got in the boat to go to Thorah Island for my girls' retreat: 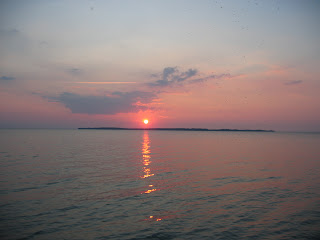 And this is the view from the dock that weekend: 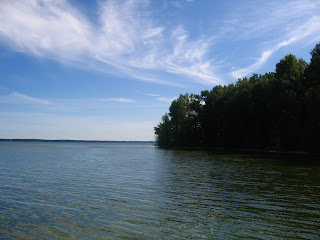 Anyway, we ate chips and sat in the sun and swam in the lake and walked around the island and got caught up on each other's lives, and it made me feel happy and young and mature all at the same time. (oh yeah - and in the spirit of taking more chances, I drove the boat. Exhilarating!)
And then, at the end of September, when I had my REAL birthday, I finally got to fulfil a dream of mine and go to Pelee Island. I've wanted to go there for years, because of the monarch butterfly migration that happens there around the weekend of my birthday. Unfortunately, the butterflies didn't know I was coming, and departed early this year. Despite the definite lack of butterflies, I had an amazing time. My husband had booked us in at the best B&B on the island and we hiked and toured the winery and walked on the beach and had dinner with two other couples who were also staying there. The only sucky part was when I threw up (repeatedly) in the back of his plane on the way home. But then, the first time I did that, I was twenty, and we weren't even dating yet. So in a way, that made me feel kind of young, too.
This is the view of our B&B as we arrived at Pelee Island. 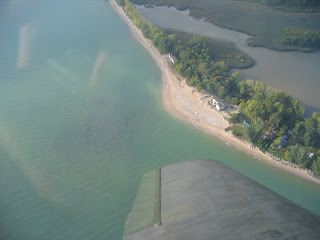 This is the view from the B&B: 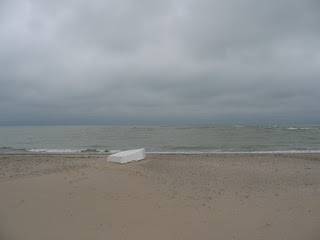 And THIS (another drumroll, please!) is what FORTY looks like, without make-up, early in the morning at the end of the party: 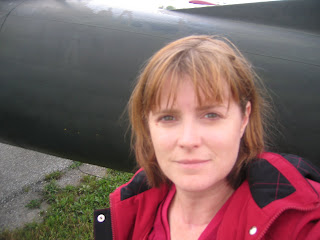 Posted by Kimberly Joy Peters at 7:42 PM No comments: