Oops - now I have to do another supersized post!

(Ahem). So many things to write about. So little time to sit down and do so.

Logically, I should save my topics (or pre-write them) and post more regularly. But someof them are "timely", and realistically, I just don't know if I'll get around to doing them individually anyway. So this post will be both eclectic and lengthy. Grab a snack. But don't whine to me about gaining "three pounds". Three pounds is nothing. Three pounds is just eat some fibre and away you go. And when you are clearly at a healthy weight, complaining about "three pounds" I don't know what to say because a) you may just be looking for validation but b) if I DO think you've gained too much weight you're either going to make me a liar (no - really - you look great!) or a big meany (yeah, those pants do actually make you look kind of chunky). And c) it makes me think you're a bit of a meany because - seriously - I need to lose quite a few more than three pounds and if you are being that harsh with yourself, I can only imagine what you are thinking about me. (You can deny it, and I can even believe it's possible that you're not directing your judgment to me, because we're usually harder on ourselves than on others, but remember: I am a WRITER. I will IMAGINE your internal dialogue and PUT WORDS INTO YOUR MOUTH if you give me reason to do so. I'm not saying you shouldn't be proactive and lose that three pounds before it breeds into twenty...I'm just saying pretend you are French and deal with it quietly.

And speaking of breeding and multiplying...remember Me, The Cat Lady? The saga continues. I have't seen my neighbour's black and white cat (identified in the post as "Sylvester") since summertime. I did ask my neighbour about him, because I was worried...and he said Sylvester was "at the neighbour's". Then he got into his car and drove away. Fast forward to the beginning of wintery weather - the grey and white one (identified as "Tweety") is cold. He has nothing to eat. He is hanging out in the driveway under our boat. He begins sneaking in. Majik loves him. They snuggle up together in the basement. Often. I leave a note for my neighbour saying "he's over here a lot - come get him". I hear nothing. I don't want to be accused of stealing him...but he likes it here. A lot. I don't think of it as cat burglering when he's free to come and go at will. And when he's just next door. And when his "family" (can you call them that, if they ignore him???) has been notified of his whereabouts. "Tweety" doesn't make sense as a name without Sylvester around. I'm calling him "Merlin" now. It keeps up with the magic imagery, and it's also a type of airplane. Even the cat-resistors in the house (yes, that includes Spencer) love him. So one year after Majik joined me (happy anniverary little guy!) I have gone from cat-less to cat-blessed. How cool is that?

Other stuff going on around here:

I went skiing the other night, just before Christmas, by myself. I'm very comfortable by myself, and when I'm doing anything even remotely athletic, I actually prefer it, because I can do things at my own pace. I especially love going at night because it's never crowded, and it becomes almost meditative for me as I glide down the hills, or float up on the chair lift. The other night, they were making snow, which added to the ethereal feel. Here's a picture: 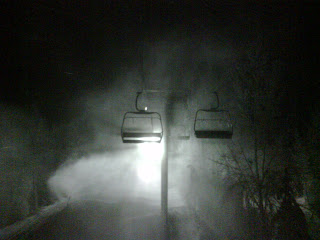 And, speaking of Christmas, we did something different this year and STAYED HOME on Christmas Eve. Wow. Loved it. Woke up rested and not feeling grinchy on Christmas Day. Must do it again. Watched It's a Wonderful Life, which I have seen before, but only once. Thought it was kind of funny that, had the Jimmy Steward character never been born, the whole town would have fallen to ruin, men would have been jailbirds, alcoholics, poverty-stricken and homeless but the worst fate they could come up with for the woman who was his wife was that, without him, she would have been "an old-maid librarian". HA! I'm trying to re-frame it, and look at it from the point of view that she would have missed out on having love in her life, which would be tragic for anyone, but still, it's funny. And it says a lot about the era in which the movie was produced.

My favourite gift was this, from my husband: 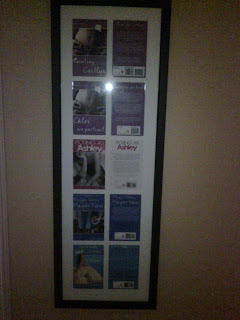 It's a framed compilation of all of my book covers (including the French version of Painting Caitlyn). So cool. Thank you, Lobster Press, for coordinating the colours to look great together!

And speaking of Lobster Press, I see from their website that their "Grim Hill" series is about to become an animated television series. Jealous.

Are you still reading? Thanks! Happy New Year!

Posted by Kimberly Joy Peters at 10:45 AM No comments: